After getting one of their better wins of the season on Saturday, the Flyers reverted back to old habits and sloppy play in a 4-1 loss to the Colorado Avalanche Monday night.

The Flyers still have not won back-to-back games all season.

Listen to Flyers games on the WPG Talk Radio app

Once again, everything is just off with this team. The passing is off. The defensive coverage has issues. Zone exits aren't clean. Zone entries aren't made with conviction. The forecheck is lacking or at times completely missing.

On nights like these, you see that this team has a work issue. It's selective, turned on and off like a switch. It's a big reason the team is as inconsistent as it gets. That's a team-wide problem from coaching to players that will get them in trouble in the standings fast.

Takeaways from another frustrating loss on home ice.

The advanced stats will tell you the Flyers didn't play a bad game at 5-on-5, and after the first period, they really didn't play terribly. The issue with the Flyers is that of their 38 shots on goal, there weren't many in dangerous scoring areas. They were held to the perimeter quite a bit. Despite that, they still had a 60.82 CF% in the game at 5-on-5 and nine high-danger scoring chances to Colorado's five. 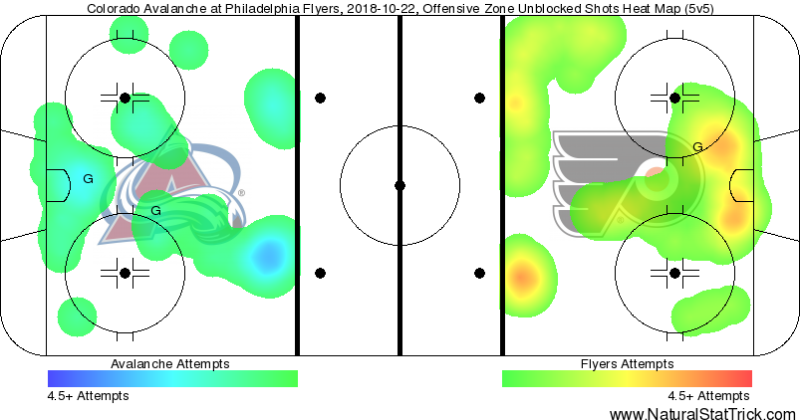 Stat of the Game

Colorado finished the game with 22 blocked shots to the Flyers 10. Usually a defenseman is leading the way in that category, but it was actually Colorado forward Sven Andrighetto who led the team with four.